As many of usknow, a well known celebrity 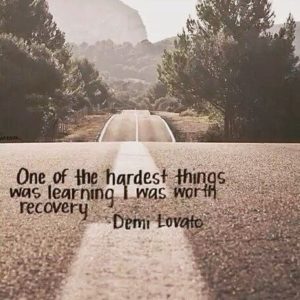 Demi Lovato has recently relapse and overdosed after being clean for 6 years. Demi has been open about her recovery hoping for the support everyone needs during these times. Being in recovery, many of us know or have had someone close to us relapse or overdose. We might think that celebrities are not “normal people” and don’t have day to day issues like the rest of us do, but they do maybe even more so from all of the stress and publicity of being famous. It is never an easy situation when someone close to us has relapsed or overdosed. Weather someone is famous or not, there is someone that looks up to you and sees us as a role model in their life. We might not see ourselves as a role model or someone to look up to but others often see something in us that we don’t see in ourselves. With Demi Lovato being a formal Disney Channel actress and now singer/song writer she has a younger fan group. With the world being am extremely judgmental place this could have a major effect on Demi’s career. Demi started her career at a young age starring in Barney and friends which was the gateway for her role on the Disney channel. She started playing the piano at the age of 7 and the guitar at age 10! Some of Demi’s biggest influences in music was Christina Aguilera. Kelly Clarkson, Jennifer Lopez, Billie Holliday and the list goes on. She has suffered from depression, eating disorders and even self harming. In November 2010 Demi made the decision to go to treatment for the first time to begin her journey to a clean lifestyle. After treatment in 2012 she came out with a documentary “Stay Strong” about her life in recovery. After 6 years of being clean and sober Demi relapsed and overdosed. She was revived with Narcan and transported to the hospital by ambulance where she recovered. One of my favorite quotes from Demi “I don’t think I’m fixed. People think that you’re like a car in a body shop. You go in, they fix you, and you’re out. It takes constant work” and she couldn’t be any more right. Recovery is constant work, you must but your all in to. Yes, we do fall off and that’s okay. No one is perfect as much as they may seem. We must learn from our mistakes and keep moving.

About the Author: Roz

Coronavirus (COVID-19) Update - We are open and fully operational

Bright Futures Centers top priority for our clients and staff is to be safe from the spread of the Coronavirus (COVID 19). The guidelines we follow for signs and symptoms are provided by the Department of Health and will be followed at all locations. Bright Futures staff has been educated about monitoring any signs or symptoms and report them to medical personnel. Medical staff has ensured that they are following the Department of Health and CDC guidelines and will report any incidents to their local health department.

Bright Futures has purchased additional sanitary supplies including antibacterial soap, hand sanitizers, antimicrobial wipes, bleach, and disinfectant sprays. We have increased cleaning and maintenance for a complete a thorough wipe down of all residences and common areas. Staff has been instructed to perform continuous disinfection of surfaces and other areas where infection can be transmitted, i.e., doorknobs, light switches, etc.

All employees are urged to staff home if they have any signs or symptoms of being ill. Employees who report to work ill will be sent home in accordance with these health guidelines.

Aside from the increased education on infection control protocols being provided, we have also set some guidelines put in place in order to limit exposure. Grocery shopping at outpatient levels of care will be done online